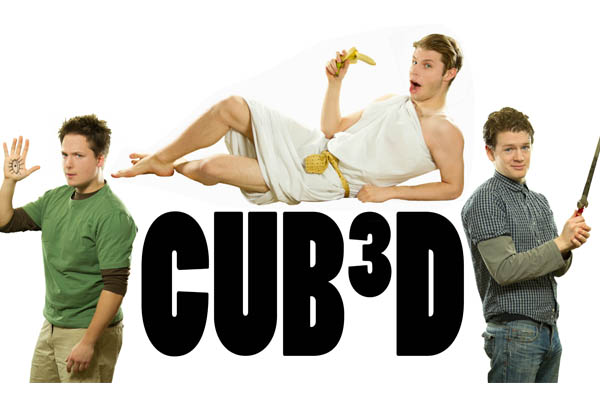 1). ROBB ENTERTAINMENT MAGAZINE™: Let’s get right into it. Can you give us a synopsis of Cubed: The Show?

JONATHAN DUBSKY: CUBED is the story of failure. Richard, Winston and Peter are all grown men in their 20’s. But, this doesn’t mean they’ve actually grown up. Each one has stuck to childhood in their own way. Winston, an ex-blue blood, is simple-minded, hedonistic, and above all else, a creature driven by sex. Richard, also a little sexist, is honest to a flaw; he can often seem abrasive, choosing to be truthful rather than polite. Peter is a sci-fi nerd. He’s soft spoken, but when someone reminds him of his failures as an academic, he gets rather defensive, and launches himself into his own ‘inner realm’. Cubed is basically a story about them embracing their immaturity. The series follows their fight to keep work, through to their drunken ‘post-pink slip’ denial, all the way to back to hell that is job hunting. The episodes are irreverent and silly, but a truly honest, if slightly absurd look at the lives of its creators: man-children.

2). ROBB ENTERTAINMENT MAGAZINE™: What inspired you to make the show?

JONATHAN DUBSKY: The show came about due to our frustrations with the “industry”, the amount and type of work available to actors in our demographic and location (Canada). My co-star and co-creator, Dan Kay and I both spent a great deal of time earning our bachelor’s degrees (film studies and production), all the while trying to work as actors in Montreal’s English film and television community. To be blunt, there’s not a lot of work for either. So, we decided that we had the knowledge and resources to produce work that we wanted to do.

3). ROBB ENTERTAINMENT MAGAZINE™: What is it like to invest so much in a non-traditional platform like the internet?

JONATHAN DUBSKY: When creating “Cubed”, we never really thought, “What does the internet want?” but more so just invested in creating the work we love to do and we wanted to see. We just knew that if we invested ourselves in telling a story, did what we could to produce something of, higher than average quality, then the audience would come and the internet would be a great tool to help us distribute our work. However, investing time, money and energy into an over-saturated and undervalued medium is a pain in the ass. Neither of us are particularly media-savvy, and so trying to pit our show against the plethora of youtube channels and handy-cam web series is a challenge. However, we were able to make the show we wanted, ignoring traditional format guidelines; so… a mixed experience?

4). ROBB ENTERTAINMENT MAGAZINE™: Who are some of the filmmakers/showrunners (past and present) that you draw inspiration from, and why?

JONATHAN DUBSKY: Personally, I fell in love with filmmaking and acting when there was mention that, “Lord of the Rings”, was being made for the big screen. From there, I bought my first camera, began shooting everything I possible could, took every acting workshop, attended theater school, film school, did the agent thing, landed a few gigs and did everything in my power to be prepared, available and ready to work for the next kind of, “Lord of the Rings”. I also am a huge fan of comedy. I love laughing in theatres and, well, comedy is just a fun ride all of the time. Comedy is also a venue for immediate creativity, improvisation and laughing your ass off on set while trying to share that experience with the world. So filmmakers like Judd Apatow definitely served as an inspiration. Edgar Wright as well: I think he’s an immensely talented comedic writer and filmmaker. His projects (Spaced, Shaun of the Dead, Hot Fuzz, Scott Pilgrim, World’s End – haven’t seen this yet, though) are all celebrations and send-ups of different genres, while staying interesting, and formally fascinating. He isn’t afraid of mixing genres, slapstick comedy, absurd comedy, character-driven work and narrative-driven films, all under one title. And for that, his work has relevance in pop-culture, high culture, and low culture. Love it, love it, love it.

5). ROBB ENTERTAINMENT MAGAZINE™: What was it like working with Matthew Raudsepp?

JONATHAN DUBSKY: Matt is a doll. He’s actually an 8-year old boy in a man’s body, but he’s still a hell of a lot of fun to work with. He’s endlessly inventive and, having come out of an improv background, ready for everything and anything we throw at him. He definitely gets you to corpse though. I am horrible at that. I’m just a laugher at things that are funny. The stuff that comes out of this guy’s mouth when no one is expecting it makes your sides split.

6). ROBB ENTERTAINMENT MAGAZINE™: What are three of your favorite TV series now, and why?

7). ROBB ENTERTAINMENT MAGAZINE™: What was it like working with Daniel Kay?

JONATHAN DUBSKY: Dan is immensely hard working. He’s a great collaborator who doesn’t accept things just for the sake of it and he makes you want to give your best. We’ve been working together, writing a series that we knew we wanted to produce on a very, very little budget and shoot ourselves, and he was there every step of the way helping things move along. He’s a great co-writer and we have great chemistry when we write together. We just hope that the amount of laughter that comes when we’re together translates on the screen.

8). ROBB ENTERTAINMENT MAGAZINE™: What are some of your hobbies besides making highly entertaining web series?

JONATHAN DUBSKY: Other than filmmaking and acting? Are you implying there are other things to do? I just spend most of my time trying to figure out the thing that can’t be figured out, which is life itself. But otherwise I just keep writing, auditioning, hoping for the best, make efforts to go out, network, and I’m a big fan of online gaming so, you may see me there sometimes.

9). ROBB ENTERTAINMENT MAGAZINE™: What other awesome projects do you currently have in the pipeline, JD?

JONATHAN DUBSKY: At the moment, Dan and I are in the midst of writing a season 2 for “Cubed”. The thing that allowed us to produce the first season is that we literally wrote the entire season around our restrictions. We knew that we had very little money, that we would have very limited access to people, extra hands, locations, etc… So with that in mind, we kept things fairly static and simple. With season 2 in the works, we are letting our imaginations run wild. Let’s just say, we’ve written the first episode, have treatments for the rest of the season and if we can get this funded, it’s going to be one hell of a crazy, hilarious, and fun journey.

10). ROBB ENTERTAINMENT MAGAZINE™: And last but not least; why should people watch Cubed: The Show?

JONATHAN DUBSKY: Why watch our show? It’s entertaining – it’s honest, while also being absurd – because I think people will genuinely laugh, not on a superficial level, but truly because they find it funny. It’s not Two and a Half men…plus another half man. It’s more like This is 40 mixed with Superbad and Shaun of the Dead. Also, Matt Raudsepp is sexy.

Check out Cubed – The Show: Facebook.com/CUBED