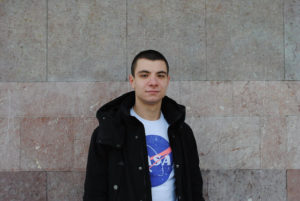 Jovan Popov or better known as “PopeBeats” is a self-taught young music producer. PopeBeats usually produces hip-hop type of music, with his specialty being in dark trap style beats. When he’s not busy making music, he’s busy studying. Jovan studies physics at Belgrade University (which is in Serbia). It all started rather funny, he and his few buddies were freestyling over a random beat. After a while, they came up with an idea to actually give rapping a try. He would then make his first original beat; the very same day. Even though the beat wasn’t his finest work, the process of making it made him fall in love with the idea of creating music; creating something to call his own. The ability to make his ideas come to life motivated him. From that day forward, creating music has become a part of his daily routine and the primary goal he aspires to.

“Jovan is an incredibly talented up-and-coming music producer. The guy works tirelessly on his craft and we are very proud to have him as a client.“ – Romane Orlando Robb (Chairman and CEO)