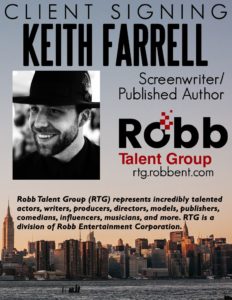 Keith Farrell is a published author and aspiring screenwriter originally from the northwest hills of Connecticut. He graduated from the University of Connecticut, where he studied sociology and political science. As a co-writer, he has helped high-profile business leaders and public figures from four continents author best-selling books. His 2018 debut novel, The Line, is a gritty crime novel that dissects the impact the heroin epidemic has had on small communities. He often draws upon his knowledge of sociology to add depth and nuance to his stories. He now happily resides in Charleston, South Carolina with his wife, Cassandra, and their cat, Hunter.

“Keith’s storytelling is captivating. He’s also driven and committed to his craft. We’re proud to be representing him and look forward to the world seeing what we see in him.” – Romane Orlando Robb (Chairman and CEO)